Spike Milligan wrote some very moving poems apart from the frivolous ... the following are some very personal poems …

Oberon
The flowers in my garden
grow down.
Their colour is pain
Their fragrance sorrow.
Into my eyes grow their roots
feeling for tears
To nourish the black
hopeless rose
within me.

Nervous breakdown, Bournemouth Feb 1967
Many of his poems concern humour and children and here is a more poignant poem ...

Growing Up II from The Mirror Running 1987 ...
Is that all there is? Goodbye!
After a million hellos
After all those bird-blessed mornings,
After the bubbling bath-time laughter,
After so many soul-searching Santa Claus,
After a million wild walks on the moors,
After the swing-swung laughing summers,
After the tear-drenched kiss-better bumped head,
After the new wear-them-in-bed red shoes,
After a tumult of timeless teddy bears,
After a delirium of dolls in prams,
After a rainbow of ice-creams,
After daddy I love you all the world -
Good-bye?

It is time to say goodbye, and a fitting goodbye, so finally from Spike ... an unpublished poem ...

How many good-byes?
When I was born
My mother took me from hospital
The nurses said good-bye
That was my first one.
I was too young to hear it
One day I will die.
Someone will say goodbye
And I still won't hear it

from digging
up the veggie garden
to tying up a shoe

he remembers
in his childhood days
of reaching for the sky

then, sad to say,
he forgets that too,
it’ll be his last refrain

This poem was motivated as a response to Geoff Page’s poem Cool Girls (from his book Human Interest) … woman and beauty transferring to men and tasks.

The silver-voiced bell birds, the darlings of daytime!
They sing in September their songs of the May-time;
When shadows wax strong, and the thunder bolts hurtle,
They hide with their fear in the leaves of the myrtle;
When rain and the sunbeams shine mingled together,
They start up like fairies that follow fair weather;
And straightway the hues of their feathers unfolden
Are the green and the purple, the blue and the golden.
October, the maiden of bright yellow tresses,
Loiters for love in these cool wildernesses;
Loiters, knee-deep, in the grasses, to listen,
Where dripping rocks gleam and the leafy pools glisten:
Then is the time when the water-moons splendid
Break with their gold, and are scattered or blended
Over the creeks, till the woodlands have warning
Of songs of the bell-bird and wings of the Morning.

Welcome as waters unkissed by the summers
Are the voices of bell-birds to the thirsty far-comers.
When fiery December sets foot in the forest,
And the need of the wayfarer presses the sorest,
Pent in the ridges for ever and ever
The bell-birds direct him to spring and to river,
With ring and with ripple, like runnels who torrents
Are toned by the pebbles and the leaves in the currents.

Often I sit, looking back to a childhood,
Mixt with the sights and the sounds of the wildwood,
Longing for power and the sweetness to fashion,
Lyrics with beats like the heart-beats of Passion; -
Songs interwoven of lights and of laughters
Borrowed from bell-birds in far forest-rafters;
So I might keep in the city and alleys
The beauty and strength of the deep mountain valleys:
Charming to slumber the pain of my losses
With glimpses of creeks and a vision of mosses.

The rhyme, rhythm, alliteration and iambic bounce give this poem a flowing musicality. For me it is a poem of reflective nostalgia on a childhood identified with the bush – enforced by the change in mood in the last stanza. A time remembered perhaps before Kendall went away as a cabin boy on a boat when 15 years old – and written when back in Australia and living a city life. (Interestingly he was born near Ulladulla, NSW - it would be very bush at that stage - and access by boat)
A good biography of Henry Kendall is on the following site: : Australian Dictionary of Biography
Comprehensive details on the life and times of Henry Kendall have been given by Judith Wright in her book ‘Preoccupations in Australian Poetry’.
Kendall was influenced and a friend of Charles Harpur and this link is explored in detail in the above book …

When Harpur died in 1868, the social climate in Australia had changed a great deal since his birth. With the colony no longer a rubbish-tip for England, but a promising young producer of wealth, with increasing population and increasing self-confidence as her isolation lessened, Australia seemed well on the way to becoming what Harpur had hoped she would be, a nation in her own right.

Many Kendall admirers might suggest that Kendall became the ‘first Australian poet’. Judith Wright states that …

… looked at hard and honestly, he is scarcely to be called an interpreter of Australia at all. He is, however, something quite as important, the poet of his own desperate struggle and final self-mastery.

A comment from Perry Middlemiss  (from … http://www.middlemiss.org/matilda/2009/08/100-australian-poems-60-bell-birds-by-henry-kendall.html ) …
By any criteria Henry Kendall's "Bell-Birds" must rank as one of the most popular poems written in Australia's literary history. Austlit, "The Australian Literature Resource", lists 32 entries in its publication history; possibly ranking only with Dorothea's Mackellar's "My Country", Paterson's "Waltzing Matilda" and one or two others in its universality. And yet it is not a poem I remember from my childhood - the Paterson and the Mackellar certainly, but not this one.
There is a lovely lilting feel to this work. The rhymes generally read as occurring naturally (though a query may be made against "sedges/ledges" in the first verse - I don't know why?), and the flow and rhythm are reminiscent of a warm, lazy spring day.
If, as seems reasonable, Kendall wrote this a year or so before its publication in his collection, Leaves from Australian Forests, in 1869, then he was probably living in New South Wales at his happiest. This was prior to his disastrous sojourn in Melbourne, the death of his young daughter and his descent into bankruptcy and mental illness. There appears to be no despair or despondency in this work, only the wonder of nature and joy of life.
A note on Bellbirds - according to Wikipedia, Bellbirds are so-called "because they feed almost exclusively on the dome-like coverings of certain psyllid bugs, referred to as 'bell lerps', that feed on eucalyptus sap from the leaves", and not because of their distinctive tinkling, bell-like sound.
Posted by Richard at 9:54 PM 6 comments:

Fifty-four
And today I learned
Something:
Birds don’t urinate
They have no kidneys
Urine and faeces combine in one.

I knew, of course
The moistness of the white drops
In the budgie cage
The foul smelling softness
In the chook house of my youth
And only yesterday
I swept, cursing, from the front verandah
The berry-stained black droppings of the currawong.
And yet I did not know.

Knowledge
Caged in familiarity
Simply scratching at the surface of my mind
Or flying, high-glossed, before my eyes
Dropping its wisdom:
Just piss and shit
Telling me nothing
Till I am fifty-four.

Fifty-four by itself has a certain command stating the importance of this age. A clear factual statement - and how many readers would know that birds do not have kidneys? The beauty of such short lines is in their direct concise nature.

A clear illustration is presented in three observations that reflect different years … budgie (child) / chook house (youth) / verandah sweeping (54) … and each of these observations tells us something about the nature of the combined bird waste … that was known and obvious and lived with. Nice balance between the first and last lines of the stanza (knowing/not knowing)

Again the power of the single word ‘knowledge’ … this is what it is all about … knowledge and ‘age’.

Caged in familiarity - such a clever way of saying that knowledge is latent in the context of the caged bird droppings … and that we can be so familiar with things that in many cases we don’t go deeper than at a superficial level … again the clever association with scratching and birds … followed by the vision of birds flying high-glossed (looking at the brilliance of the bird and not it’s droppings).

And Oh shit - the discovery of something at the age of 54 … and something that has only just been thought about.

This simple poem has a clever and amusing take on ‘knowledge’, ‘age’ and ‘self-discovery’.

(Janne Graham is a local poet from Canberra)
Posted by Richard at 3:33 PM No comments:

The Queen Marches On 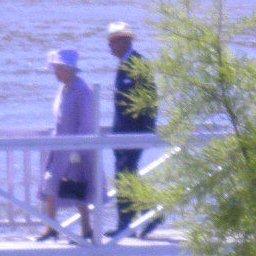 The Queen Marches On
(The Queen leads Prince Philip during her visit to Canberra in November 2011, walking from the royal launch to the Floriade Flower Show – Commonwealth Gardens)


Diamond Jubilee celebrations (June 2012)
Posted by Richard at 10:16 AM No comments: