Home Post and Index
Readers may be interested in Judith Wright's property 'Edge' at Braidwood. Below is a photo taken when Meredith McKinney took a walk through the grounds at the 'Two Fires Festival' in 2005. It is now in private hands but I am told they are friendly. A link to more images ...  'Edge' - at Braidwood. 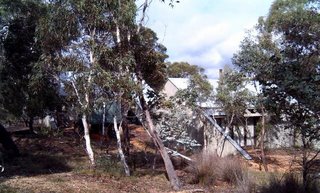 Posted by Richard at 8:50 AM No comments: 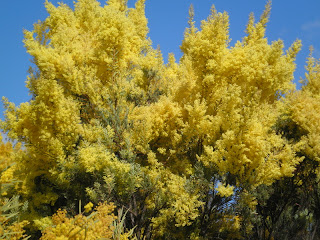 The tree knows four truths -
earth, water, air and the fire of the sun.
The tree holds four truths in one.
Root, limb and leaf unfold
out of the seed and these rejoice
till the tree dreams it has a voice
to join four truths in one great world of gold.
-Oh that I knew that word!
I should cry loud, louder than any bird.
Oh let me live for ever, I would cry.
For that word makes immortal what would wordless die;
and perfectly, and passionately,
welds love and time into the seed,
till tree renews itself and is for ever tree –
Then upward from the earth
and from the water,
Then inward from the air
and the cascading light
poured gold, till the tree trembled with its flood.
Now from the world’s four elements I make
my immortality;  it shapes within the bud.
Yes, now I bud, and at last I break
into the truth I had no voice to speak:
into a million images of the Sun, my God.
From The Two Fires 1955
The Collected Poems
© Judith Wright

The four prime elements (earth, water, air and fire) ... are needed by the tree ... (and define the world). But what is this process (love) that creates 'a voice' from a seed ... oh that it could be known ... the key to immortality

In the beginning was the word ... the start of the process ... a never ending process as the tree continues to renew itself ... regeneration ... immortality ... for the wattle the transformation is to a 'flood of gold' ... (gold =  god with love inserted).

Like the tree ... in likewise fashion to nature ... JW defines her immortality ... and like the wattle to the myriad images of the sun ... her metaphorical God ... the truth could not be expressed by her voice (but perhaps by her poetry ... and perhaps by becoming her 'natural self').

Footnote ...
The image: a wattle in full spring bloom, near the ANU Canberra.
Posted by Richard at 10:54 PM No comments:

Home Post and Index
(with thanks to John Shaw Neilson)


The old man sat beside me.  I
heard not what his old ears could hear:
a sound, he said, from a far-off land
comes to me, faint, but clear.
Is it, I said, from East or West?
The soul of a trapped man
who with a firm voice spoke out loud
the deceit that was deep of his clan.
Was he, I said, born to the truth.
that in the mad escape of a silent day
he made by his words known
the wrongs he had to betray.
Listen, the old man said, there are
no words, no message comes to me;
but it is almost a voice that stirs
like the murmuring wind in a tree.
Does he, I said, speak of winter cold
and the isolation of a damp cell
that in the full depth of night
seek an escape from his hell?
Is he so destroyed by fowl deeds
that he aches for your ear.
Does he now seek communion
to off-set his fear.
Listen! The old man said.  For all
your needless talk you do not see,
there is a sound, a knock, a tap,
this evening addressing me.
Is it, I said, words of love
imperishable, wrapped with disdain
that move as a frightened dove
out of the dark and the rain?
Is it the brave beat of his heart
too willingly pierced to make change?
Is it the last words that he uttered
that restlessly fly into range?
Silence! the old man said.  Don’t talk,
don’t talk any more, don’t you see
tire me no longer now,
for his pain is crippling me.

Footnote - to recognise 50 years of Amnesty
Posted by Richard at 9:20 PM No comments:

Much has been said about the moon symbol in this poem in connection with blood and feminity . I do not think any deep significance is warranted.

But the moon was a strong ‘mother symbol’ significant in Sylvia Plath poems. (Refer Bitter Fame - Anne Stevenson pages 23-24 for a first hand account of SP and the moon).

It is sad, knowing the circumstances, that the motherless Frieda is communicating with this ‘mother symbol’ and visa-versa. And when TH included this in Wodwo in 1967 one can't help think that TH may be lamenting the fact that SP cannot see her daughter now ... she might be equally amazed ... in kin with the moon.
Footnote ...

Frieda did go on to write poetry in her own right and below is the poem Ghost from her collection ‘Wooroloo’ …
Ghost
Lost he came to watch me,
Wanting something.
Fearful of discovery
As if a dead man
Had anything to hide.
He touched me, like a blind man
Learning woman for the first time,
Fingerprint by fingerprint
Until he held my echo
In his hands.
He took his breath between his lips
To fill his hollow lungs,
And watched me live
As if he could unbury
How he died.
Piece by piece he stole me
Until I had all gone.
Frieda Hughes (from Wooroloo)
Posted by Richard at 7:11 AM 1 comment:

Home Post and Index
Yesterday I went to the Yass Valley Writers monthly meet for an introductory workshop on Tanka given by Kathy Kituai (a Canberra poet well versed on the subject).
Some notes from the session …
. Tanka is traditionally 5 lines in 5/7/5  7/7 syllabic form … the first three lines focused on observing the natural world with the last two forming a ‘reflective couplet’.
For Tanka in english it is more acceptable to use the syllabic form 3/5/3  5/5.
. It is quite acceptable to base the 5 lines using short/long/short  long/long without worrying too much about syllables
. writing the first 3 lines of Tanka teaches observation and definition focusing on a specific object
. writing the last two lines gives an internal perspective that others may identify
. explanation is to be avoided … the text is a catalyst … the reader must discover
. reread over several days … absorb and discover … many readings may be necessary before any ‘aha’
. the third line may be a ‘pivotal line’ … read the first 3 lines then repeat the third line again with the last two … is the third line applicable to both readings? (married into both – pivotal)
. use enjambment when reading … i.e. keep twisting around the ends of the lines … there are no full stops
. when reading Tanka which is a translation the syllabic structure will disappear
. mull over words especially where there is symbolic meaning common in Japanese and Asian work (I recommend using a mind-map as a tool for personal discovery)
. try it for yourself ... to capture the moment ... to relive that moment
Two Tanka examples discussed …
red wind chimes
hanging upside down
rosellas
just out of reach
of plum blossoms
Kathy Kituai
for breakfast
we eat our eggs
without salt
starting our day with
tiny, lopsided smiles
Jeanne Emrich
If you get the chance to attend one of Kathy's workshops you will not be disappointed. It will open a new window on this poetic form and even if you do not normally use this form in your writing the concepts can be applied elsewhere to surprising benefit.
Recommended Website … http://www.tankaonline.com/
Posted by Richard at 10:22 AM 1 comment: