Christmas Greetings to all
Posted by Richard at 7:30 AM No comments:


A Visit from St. Nicholas

'Twas the night before Christmas, when all
through the house
Not a creature was stirring, not even
a mouse.
The stockings were hung by the
chimney with care,
In hopes that St Nicholas soon would
be there.
The children were nestled all snug
in their beds,
While visions of sugar-plums danced
in their heads.

And mamma in her 'kerchief, and I in
my cap,
Had just settled our brains for a long
winter's nap.
When out on the lawn there arose
such a clatter,
I sprang from the bed to see what
was the matter.
Away to the window I flew like
a flash,
Tore open the shutters and threw up
the sash.

The moon on the breast of the
new-fallen snow
Gave the lustre of mid-day to
objects below.
When, what to my wondering eyes
should appear,
But a miniature sleigh, and eight
tiny reindeer.
With a little old driver, so lively
and quick,
I knew in a moment it must be
St. Nick.

More rapid than eagles his coursers
they came,
And he whistled, and shouted, and called
them by name!
"Now Dasher! now, Dancer! now, Prancer
and Vixen!
On, Comet! on, Cupid! on, Donner
and Blitzen!
To the top of the porch! to the top of
the wall!
Now dash away! dash away! dash
away all!"

As dry leaves that before the wild
hurricane fly,
When they meet with an obstacle, mount
to the sky.
So up to the house-top the coursers
they flew,
With the sleigh full of toys, and St.
Nicholas too.
And then, in a twinkling, I heard on
the roof
The prancing and pawing of each
little hoof.

As I drew in my head, and was
turning around,
Down the chimney St. Nicholas came with
a bound.
He was dressed all in fur, from his head
to his foot,
And his clothes were all tarnished with
ashes and soot.
A bundle of toys he had flung
on his back,
And he looked like a peddler just
opening his pack.

His eyes - how they twinkled! his dimples
how merry!
His cheeks were like roses, his nose like
a cherry!
His droll little mouth was drawn up like
a bow,
And the beard of his chin was as white
as the snow.
The stump of a pipe he held tight in
his teeth,
And the smoke it encircled his head
like a wreath.

He had a broad face and a little
round belly
That shook when he laughed, like a
bowlful of jelly!
He was chubby and plump, a right
jolly old elf,
And I laughed when I saw him, in spite
of myself!
A wink of his eye and a twist of
his head,
Soon gave me to know I had nothing
to dread.
He spoke not a word, but went straight
to his work,
And filled all the stockings, then turned
with a jerk.
And laying his finger aside of
his nose,
And giving a nod, up the chimney
he rose!

He sprang to his sleigh, to his team
gave a whistle,
And away they all flew like the down
of a thistle.
But I heard him exclaim, ere he drove
out of sight,
"Happy Christmas to all, and to all
a good-night!"

A Christmas poem both in German and English …

When it was translated from the English to German in 1947 by Erich Kastner the lines in italics were not included. The reindeer names Donner and Blitzen are those used by Kastner.

*see this Web link - http://german.about.com/library/blkaestner_nikolaus.htm.
Posted by Richard at 9:27 PM No comments:

Upon the Lonely Moor -Lewis Carroll


I met an aged, aged man
Upon the lonely moor:
I knew I was a gentleman,
And he was but a boor.
So I stopped and roughly questioned him,
“Come, tell me how you live!”
But his words impressed my ear no more
Than if it were a sieve.

He said, “I look for soap-bubbles,
That lie among the wheat,
And bake them into mutton-pies,
And sell them in the street.
I sell them unto men”, he said,
“Who sail on stormy seas;
And that’s the way I get my bread--
A trifle, if you please.”

But I was thinking of a way
To multiply by ten,
And always, in the answer, get
The question back again.
I did not hear a word he said,
But kicked that old man calm,
And said, “Come, tell me how you live!”
And pinched him in the arm.

His accents mild took up the tale:
He said, “I go my ways,
And when I find a mountain-rill,
I set it in a blaze.
And thence they make a stuff they call
Rowland’s Macassar Oil;
But fourpence-halfpenny is all
They give me for my toil.”

But I was thinking of a plan
To paint one’s gaiters green,
So much the colour of the grass
That they could ne’er be seen.
I gave his ear a sudden box,
And questioned him again,
And tweaked his grey and reverend locks,
And put him into pain.

He said, “I hunt for haddocks’ eyes
Among the heather bright,
And work them into waistcoat-buttons
In the silent night.
And these I do not sell for gold,
Or coin of silver-mine,
But for a copper-halfpenny,
And that will purchase nine.

“I sometimes dig for buttered rolls,
Or set limed twigs for crabs;
I sometimes search the flowery knolls
For wheels of hansom cabs.
And that’s the way” (he gave a wink)
“I get my living here,
And very gladly will I drink
Your Honour’s health in beer.”

I heard him then, for I had just
Completed my design
To keep the Menai bridge from rust
By boiling it in wine.
I duly thanked him, ere I went,
For all his stories queer,
But chiefly for his kind intent
To drink my health in beer.

And now if e’er by chance I put
My fingers into glue,
Or madly squeeze a right-hand foot
Into a left-hand shoe;
Or if a statement I aver
Of which I am not sure,
I think of that strange wanderer
Upon the lonely moor.


Upon the lonely moor … comments …

S3 … The gentleman has a mathematical bent with interest in riddles (befitting of  Charles Hodgson … compare to Wordsworth’s poem when Wordsworth is thinking about poetry when talking to the leech gatherer)   … forces calm (a metaphorical kick?) then asks the same question … and interestingly pinches the poor fellow … showing arrogance and disrespect

S4 and S5 … again a lot of nonsense and non-comprehension …and again the Gentleman distracted by idle thoughts (Rowland’s Macassar Oil – a well-known Victorian beautifier for the hair - for the Upper Class) … the Gentleman again questions ... boxing ears and tweaking the aged man’s hair as though the poor fellow is a school boy and he a teacher

S9 … whenever the Gentleman does something by mistake that is not fitting he thinks of the aged man who is living a non-fitting life at least to his frame of reference … and of course if he had been listening (or aware of what he was doing) would he have put his foot into the wrong shoe in the first place?

Gentleman … 1. a man of good breeding, education, and manners. 2. (as a polite form of speech) any man. 3. a male personal servant, or valet, especially of a man of social position: a gentleman's gentleman. 4. a man of good social standing by birth, especially one who does not work for a living.5. History a man above the rank of yeoman

Boor … 1. a rude or unmannerly person, 2. a peasant; a rustic.3. an illiterate or clownish peasant.4. a Dutch or German peasant.5. any foreign peasant.

Note ... See also Chapter 8 of Through the Looking Glass  … Alice talking to the White Knight with the text on which this was based 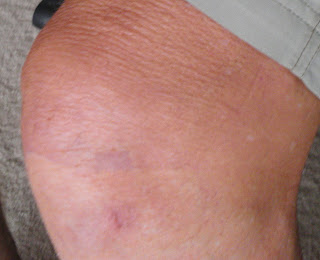 This image is of my knee 5 days after arthroscopic surgery.

Asclepius please, I’m talking to thee
I have a slight problem with a crook knee.
My meniscus may need sort of mending
because I’m getting pain when I’m bending.

Asclepius came with a fibre-optic tube
and from my knee his rod did protrude
while the snake-eye inside peered at the view
sending images back to the surgical crew.

The video monitor blew-up the sad sight
clearly portraying what wasn’t quite right
then on the other side with a snip and a snap
a surgical instrument removed all the crap.

So if your meniscus is kind of sus
repair is possible with minimum fuss!

Richard Scutter 12 November 2011
Knee note ... This sonnet was written as a way of a thank you and to show it is a simple procedure that is not at all intrusive. It has been estimated that over four million arthroscopies were performed last year.

Posted by Richard at 7:31 AM No comments:

This was a small book produced in December 2010 containing a selection of some of my more personal poetry plus accompanied images dating from the time I first started writing poems in 2002. It was a home-produced handbound hardback book; a very limited edition produced primarily for family and friends. A high-quality production published by one by the name of Maureen Scutter.

This book is now available in eBook pdf format as a mirror copy with minor corrections ... primarily to disseminate further afield for family and friends, but should any other party be desirous (not delirious) for  a copy please send an Email request.


This link shows the first few pages of the eBook