Home Post and Index
I dreamt last night Christ came to earth again
To bless His own. My soul from place to place
On her dream-quest sped, seeking for His face
Through temple and town and lovely land, in vain.
Then came I to a place where death and pain
Had made of God’s sweet world a waste forlorn.
With shattered trees and meadow gashed and torn,
Where the grim trenches scarred the shell-sheared plain.
And through that Golgotha of blood and clay,
Where watchers cursed the sick dawn, heavy-eyed,
There (in my dream) Christ passed upon His way,
Where His cross marks their nameless graves who died
Slain for the world’s salvation where all day
For others’ sake strong men are crucified.
Eva Dobell (1867-1963)
Eva Dobell worked as a nurse during the war.
Another war poem, but this time from a female perspective.
The 14 line sonnet is split into eight and six. The 10 syllable pentameter lines have rhyming scheme abbaadda cdcdcd.  This scheme strongly integrates each section.
The turn in the second section answers the question posed by the first and identifies where Christ would appear if walking the earth in 1916. The apt title mirrors the religious season devoted to the birth of Christ.
By definition perhaps it is appropriate that Christ would appear where he is needed most. As a nurse Eva Dobell would have been in a similar situation in attending the most pressing needs of the injured.
The rhyming couplet is said to be the most important lines of a sonnet. In this case added reason is given to Christ’s appearance with the sacrifice of the soldier equated to that of Christ. Both are 'strong' in the sense of being willing to sacrifice their life rather than in any physical strength. Though of course many went to war in complete ignorance of what this entailed and the horrors that lay ahead.
Footnote …
It takes little imagination to define places in the World where the attention of Christ is most needed, including the devastating effects of natural disasters in the recent floods and earthquakes. If Christ is a ‘living Christ’ we might ask in what way is he addressing such situations and why are such horrific events even tolerated. This was in line with a question posed to the Pope at Easter by a child. The Pontiff gave a very inadequate response.
Posted by Richard at 9:37 AM No comments:

The Fragrance at Flanders

Home Post and Index
Easter and Anzac kiss this year with death and life a prominent feature in each event.
A few weeks ago I had occasion to take a visitor to the Australian War Memorial. Death was often a welcome release from the horrors of the trenches of World War I and new-life never more deserving than for those that died this way. Reading some of the details of the battles gave pen to the following …
The Fragrance at Flanders
This was not scented Alps
where nothing but the daylight changes,
nor descending by the Starnberger See
after early exercise, strolling into
the Hofgarten to drink coffee with friends
as unbridled talk merges
with the expanse of morning.
Nor was this a plunge
into a Bloomsbury morning
of Clarissa opening French windows
to the breath of a summer day. Nor a
blackbird singing in the daze of early light,
or the buying of flowers while thoughts distract
to the arrangement of a party.
At Flanders, in the half-born morning
body after body fell
indiscriminately into mud.
Each man glad to take their leave,
exuding a common stench
until it accumulated in a message
that couldn’t be ignored.
For a brief moment
there was a lull in the fighting
as the men were buried.
And for once there was sensitivity
as if Christ walked out of dead flesh
to shake hands with both sides -
or perhaps just nature self-correcting.
© Richard Scutter 25 April 2011
Such interludes were common in other battles.
At Anzac cove on the 19 May, (1915) the Turks made a massive attack to drive the Anzacs off the peninsula. The attacking troops suffered heavily, losing over 3000 dead before daylight. An armistice was arranged on 24 May to bury the Turkish dead rotting in no man’s land.
(Text taken from The Defence of Anzac – Australian War Memorial)

Published in the Anglican Holy Convenant Easter Day Bulletin - Jamison, Belconnen
Posted by Richard at 6:53 AM No comments:

To the Fallen - Lawrence Binyon

Home Post and Index
To the Fallen
They went with songs to the battle, they were young,
Straight of limb, true of eye, steady and aglow,
They were staunch to the end against odds uncounted,
They fell with their faces to the foe.
They shall grow not old, as we that are left grow old:
Age shall not weary them, nor the years condemn.
At the going down of the sun, and in the morning,
We will remember them.
They mingle not with their laughing comrades again;
They sit no more at familiar table of home;
They have no lot in our labour of the daytimes:
They sleep beyond the foam.
But where our desires are and our hopes profound,
Felt as a well-spring that is hidden from sight,
To the innermost heart of their land, they are known
As the stars are known to the night;
As the stars that shall be bright when we are dust,
Moving in marches upon the heavenly plain,
As the stars that are starry in our time of darkness,
To the end, to the end, they remain.
Laurence Binyon (1869-1943)
Though he never enlisted, Binyon joined the Red Cross and went to the Western Front. The second stanza of this poem adorns many war memorials over the British Commonwealth.
The poignant words of the second stanza grip the mind with a stand-alone passion that makes it hard to move on. This dominance in the mind of many readers may pose a problem in the way the poem is read. I may be wrong but I detect a march rhythm in the reading of the full poem.
There is a clear marching theme in the first and last stanza. They marched off to war ... they went with songs to the battle (stanza1, first line) and … moving in marches upon the heavenly plain (stanza 5). The repetition of stars and to the end (stanza 5) again adds weight to my suggestion on the way the poem should be read.
There is a certain irony that although age shall not weary they do in fact continue to march on - albeit with stars in their eyes. Of course there is a great difference between spiritual marching and the army.
Posted by Richard at 8:57 AM No comments:

Some Famous War Poets and Poems

Below lists some famous war poets with associated poems ... selected for a U3A discussion group on war poetry ... a wide selection and well worthy of a Post ... 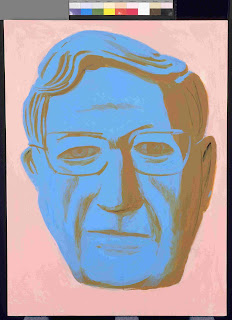 
Sharing some context …
I never had the privilege of meeting Peter. I help co-ordinate a U3A Poetry Group in Canberra and one of the sessions last year looked at his poetry. I have read some of his poems and details about his life including those from Clive James.
The text of the poem is based on my reading of him from above; a rather depressive person who had to cope with the loss of his first wife under tragic circumstances.
I have used words in association with some of his poems - in particular from his poem ‘What I have written I Have Written’ with obvious reference to the source of those words. He was also known to have regarded poetry as potential energy. In that regard any energy release will be dependent on future readers of his work – and the same goes for all art I suppose.
I liked the expressive depth in Tony Clark's portrait and of course the use of colours. He must have been a very engaging subject, never short of a word, and by all accounts very responsive to those who met him.
Posted by Richard at 3:15 PM No comments: