Even the sun-clouds this morning cannot manage such skirts.
Nor the woman in the ambulance
Whose red heart blooms through her coat so astoundingly –

A gift, a love gift
Utterly unasked for
By a sky

Palely and flamily
Igniting its carbon monoxides, by eyes
Dulled to a halt under bowlers.

Oh my God, what am I
That these late mouths should cry open
In a forest of frosts, in a dawn of cornflowers.

Nothing in sun and sky can match the poppy skirts (petals) in their colour … nor the woman (reference to herself) in the ambulance whose red heart is amazingly kept alive ... the woman close to death … others not so lucky ... she has been rescued and will survive.

This late showing is out of context with the season … and is a gift unasked for …and in this regard, SP could be talking about her astoundingly good luck in surviving her earlier suicide attempt … her red heart did bloom … how come she was saved? … how come she was given a second chance? … SP did not ask for this … to be re-born … at least she acknowledges this gift as a 'love-gift' ... even if she is not thankful.

… the medicos that saved her did not know her … see her red passion, her emotional state … how could they … they wear bowler hats … head-centric on their work

… and then the lament of not knowing who she is … the poppy in October … out of context … but still alive … she cries aloud for some understanding … why should she be alive in a ‘forest of frosts’ (in a deep tangle where growth is unlikely - how she saw her life) and in a ‘dawn of cornflowers’ (emerging against the bland mass of the common ... a little arogance perhaps)

Note ... this poem was written on SP’s last birthday (27 Oct 1962) … her 30th birthday … at a time when she was living by herself (with the two children) in London – separated from Ted Hughes  … she also wrote another poem ‘Ariel’ on the same day … so she had time to herself on this day to devote to poetry … and to question her existence … to question why she has survived out of season (like the poppy) … and to ask why she is still alive … and inferred - why is live so hard … it is a cry for an explanation from the deep intensity of her being for a meaning in her troubled world ... questioned in a state of mental unrest.

… and whether any physical poppies were around on this her birthday is open to question … they could be mind-poppies … (refer also to a previous poem ‘Poppies in   July’ written in Devon in the summer … when times were different.)

Here is a link to a recommended Site with 10 years of discussion material on the work of Sylvia Plath …
http://www.sylviaplathforum.com/

... and here is a poppy from the Australian spring flair taken at a recent open garden, a poppy very much in season ... 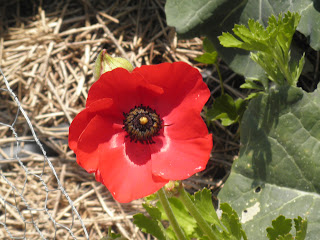 Home Post and Index
I take you there, falsely cheerful
Inconsequentially chattering about
Golden poplars and reddening maples:
Colours
Of autumn
I leave you there, apprehensive
To the care of stethoscopes
And surgery while long wet weeks
Drown me
In time
I watch you there, inert, bed-stretched
Leasing your life to pumps and plastic
As slivers of sun insinuate:
Days dredged
From night
You are released, the landscape
Of your self scalpel-scarred
Excoriated weather signs
Marking
Your time
You come home through fallen leaves
Browned and damp, unseeing,
Uncomprehending, as swirling squalls
Sweep in
Our winter
© Janne D Graham
1990 (edited 2011)
The above poignant poem was given to me by Janne, a member of our U3A poetry appreciation group. There is plenty of space for the reader to construct their own image to the situation and develop further after reading the final stanza. The weather sign of a good poem that it promotes lingering after-thought in the mind of the reader.
Posted by Richard at 9:53 PM No comments:

The Door - to Poetry Perhaps

Go and open the door.
Maybe outside there’s
a tree, or a wood,
a garden,
or a magic city.

Go and open the door.
Maybe a dog’s rummaging.
Maybe you’ll see a face,
or an eye,
or the picture
of a picture.

Go and open the door.
if there’s a fog
it will clear.

At a recent ‘Gods’ poetry meeting in Canberra local poet Moya Pacey opened her session reading the above poem by Miroslav Holub. She used it as an entry to her understanding of poetry ... poetry is a door to personal discovery ... the unknown within ... and by creating your own poetry there will be a discovery ... of something within that has yet to get voice ...

... of course many are just plain content to live within the safe square of known existence ... and I have known those who continually wall up there room ... eventually an earthquake may come through circumstance

... but it is not sufficient to just open the door you need to walk through! If you just stand there in the draught you will catch cold (no don’t run back inside) ... take a good look ... then take a few steps into that big unknown ... and if you are not into poetry maybe those steps are to another life altogether ... perhaps bungie jumping or walking across the Sydney Harbour Bridge is more your thing!

Enjoy a new day - or should I say a day different from the yesterdays of your life.
Posted by Richard at 5:34 PM 2 comments:

Home Post and Index
A top word on the written word … for those interested in writing ...
... Writing Australia was officially launched in August …
… it is a federation of existing State Writers’ Centres in the ACT, NSW, South Australia, Victoria and Tasmania … the co-operative nature means that the sum should be greater than its components … I note that WA and Qld are not yet in the fold ... I'm sure there are a few writers around in those States.
… members of the component organisations are automatically members of the Federal Body
… The foundation National Director is Mary Delahunty … an award winning journalist and involved with such ABC programs as Four Corners, The 7:30 Report and Sunday Afternoon
… the initial program includes – Writing Australia Awards, Writing Australia Tours (where top writers give classes and workshops), and a WebSite which gives a central portal with information on writing happenings and literary events.
… the Website link is … writingaustralia.org.au
Posted by Richard at 2:18 PM No comments:

You don't have to know anything about the life of Pablo Neruda, or what it is like to experience rain in Chile - one of the wettest and driest of places - but context of course always helps give deeper meaning to any reading. However, what is more important is the translation - assuming of course a translation is needed. If spanish is your native tongue then you will understand this poem to the full in that language - if not you will have to rely on how this work has been represented by the translator. I have chosen the words above that I like after reading a couple of translations.

Love and the sea - inseparable natural constants  ... and the wait knowing that the rain will come ... that inherent sense ... as certain as life and death.
From Wikipedia ... On Neruda's house Isla Negra ... It is about 85 km to the south of Valparaíso and 110 km to the west of Santiago. It was his favorite house and where he and his third wife, Matilde Urrutia spent the majority of their time in Chile. Neruda, a lover of the sea and all things maritime, built the home to resemble a ship with low ceilings, creaking wood floors, and narrow passageways. A passionate collector, every room has a different collection of bottles, ship figureheads, maps, ships in bottles, and an impressive array of shells, which are located in their own "Under the Sea" room.

A national treaure ... it is on my list of poetry places to visit.
Posted by Richard at 9:30 AM No comments: